Ever since Dear Leader Rahul Gandhi said something about there being two India’s, I’ve always been wondered about the second India. Was he talking metaphysically? Was he going all Philip K Dick on us and talking about an India which exists in a parallel universe, where the grass is green and even the boys are pretty? Nobody had answers to these questions. So, to solve this huge mystery, I put on my cap, stuffed a few clothes into a backpack, got into the car and started driving to an unknown destination. (Not really. I don’t wear caps, my trip was pre-planned and I took a plane. And had to pay for extra luggage. But, hey, the truth doesn’t always sound romantic).

So there I was, in the heart of Real India, (I don’t really know what is really the heart of Real India. Only Generalissimo Gandhi knows that. But this is usually how one begins such pieces, so bear with me.), Amritsar. I hadn’t been to Punjab before. but coming from Delhi, I thought I could handle Punjab. I thought I knew everything there was to know about Punjab. Butter chicken, bhangra music and Harbhajan Singh. What else is there to know? But no, there is so much more to Punjab. There is also Butter Nan, Meethi Lassi and Harbhajan Mann. I was accompanied on the trip by a Mallu friend from Bangalore. Who, for the record, couldn’t stop complaining. You know how those Madrasis are. (Yes, yes, we get it. Everyone in North India is rude and doesn’t understand rules and regulations. Pfft! Rules and regulations are for people who cannot beat other people up and buy their way out of jail!). I guess this is why the Aryans must have driven all the Madrasis down South in ancient times. Because of the constant whining! Sheesh!

Anyway, what’s with the food in Amritsar? I had lunch one day and wasn’t hungry for the next whole week. I thought Italian food was heavy, but it’s got nothing on Amritsari food. Seriously, if there is a solution to world hunger, I’m pretty sure it lies in Amritsar.

While I was in Amritsar, I was also scheduled to go to the Wagah Border. I wasn’t particularly interested in going there because patriotism bores me. If I wanted to hear people lose their shit over a worthless cause, I’d watch a match featuring the Indian cricket team. I said I would go, but only if we could get the good seats. Not the nosebleed seats with the rest of them. I was ready to embrace real India and everything, provided I didn’t have to come into contact with it’s inhabitants. I didn’t want to try too many things at the same time, like a small town resident visiting a mall in a big city for the first time.

However, my socialist Madrasi friend was feeling let down. Since he is a unpretentious prick man of the people, he wanted to sit among the nosebleed seats. (Abeyaar, what do they feed you down South? Do they grate the communist manifesto into your dosas? Leave the communism to the Bengalis. That’s all they’ve got anyway. The thing is, if we can’t use money to decide the importance of people, the whole world will be thrown into chaos!)

So we get ready and head towards the border. The drive is a good one. The scenery was decent, but I was expecting something more Yash Rajesque. The government should look into that. Well, even though it could not hold up to the production values of a Yash Raj movie, I was quite enjoying the scenery. Until my driver/handler (Oh yes! I had a handler. SUCK ON THAT, POOR PEOPLE!) told me that some of it was Pakistan. Now I am as tolerant as the next person, but suddenly the grass on the Pakistani side started looking evil and gave off bad vibes. Like it wanted to assassinate me or something. Typical!

When we reached our destination, we were allowed to take our car a kilometre or two closer to the border than the riffraff general public (Obligatory #LikeABoss). But I had to still make the supreme patriotic sacrifice and had to walk a little. Whilst we entered through the VVIP entrance, we found out that our seats had already been taken up. Apparently, some asshole minister showed up with extra members of his asshole contingent. Can you believe how entitled these people are? They think they can just waltz in with their power and government contacts and expect to be given special treatment. What kind of a sociopath does that? 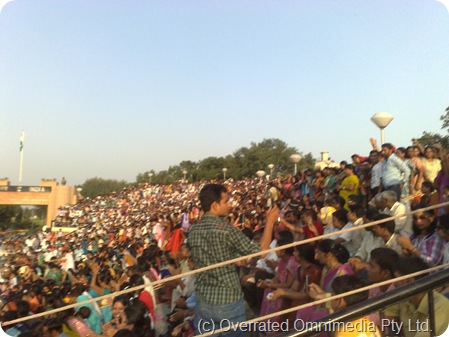 To the delight of my pinko commie friend, we were then led to the semi-nosebleed section. I tried to protest, but the loud music drowned out  everything I said, just like when the sage old family senior at a Punjabi wedding tries to convince all the dancing members of the groom’s party to stop dancing and come inside the wedding hall and is drowned out by the sound of the band. Finally, the Yash Raj fantasy was coming true! People were dancing, without any reason whatsoever! However, the dancing was like an episode of Glee, if Glee were choreographed by a blind guy with no legs who is also mute and cannot move his hands. 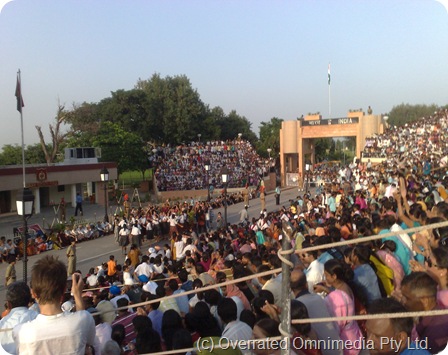 For a moment, I was lost in the fanfare. About three hundred people who didn’t know each other were “dancing” next to each other, while another ten thousand other were singing along. We sat there looking at people doing what can only be described as moving their bodies in a weird fashion, while they played every bollywood song even remotely related to patriotism. I think they use the same set of songs at concerts for NRI’s. It seemed strange for someone like me to see all these people, most of whom don’t know each other (I’m assuming. Unless of course, they were all part of a small punjabi wedding party), enjoying the moment together. It was like their differences didn’t exist and just being at the same place at the same time was enough reason to bond. This usually only happens during college fests in Delhi or at an Osho commune.

Suddenly, they played Jai Ho and my bubble burst. Of course this song got the most applause. Of course even the white people jumped in to dance with the natives. Apparently, along with the cellular network, even irony did not exist here because nobody else seemed bothered that the song of a British movie got the biggest pop at the India-Pakistan border. I could imagine the G4 freedom fighters, Gandhi, Nehru, Patel & Bose looking down from freedom fighter heaven, shaking their head and going “We did all that for these assholes?”

Anyway, unbeknownst to me, the ceremony was about to get even more ridiculous. The dancing was followed by shouting. The MC of the event made it clear that we could only shout positive slogans, as part of the new confidence building measures. But that didn’t stop him from pointing us to VIOLENTLY VOMIT OUR SLOGANS in the general direction of Pakistan.

I only briefly looked at the Pakistani side, but it had a look of sadness and despair. Kind of like a metaphor for the whole country. The men and women were sitting separately. When their MC was encouraging them to VIOLENTLY VOMIT SLOGANS in the general direction of India, he didn’t sound like he believed those slogans himself.  It was really transparent that they were written by a quixotic Pakistani government bureaucrat who was serving in the army during the 1971 war. And really, those slogans were even sadder than the whole atmosphere in that place. That’s because during partition, all the best slogans representing the independence movement were taken by India. Wow, whoever our lawyer was during that time, he was one crafty sumbitch! Not only did we get the best of everything, we stuck them with Balochistan! I bet the hardest part must have been trying to make them believe that we actually wanted to keep the Frontier provinces. Jinnah was such a n00b! Governor General Smoking Skull got pwned by Prime Minister Horny McEdwinaPants!

Before all the shouting commences, they play the battle cry theme song from the Mahabharatha teevee program (I’m guessing Daft Punk wasn’t available?), because nothing signifies futile battles like the Mahabharatha. So first, the crowd shouts, then some of the soldiers pull a Shankar Mahadevan and shout the word “OH” for a really long time without taking a breather. Then the crowd applauds them and shouts some more slogans. Then some of the soldiers march towards the gate, while making their feet walk like an Egyptian. Which the crowd applauds and this continues for a while.

All the shouting and applauding presents us with really strange moments.. Like there was this group berating those of us who were mute spectators to the festivities for our lack of patriotism. They were obviously from Bombay. Then there was this group which kept shouting Inquialab Zindabad. Because, really why the fuck not? It’s been sixty three years since the British left, but, whatever, JUST IN CASE THEY LEFT SOMEONE BEHIND! Better safe than sorry!

Then, after what it seems like forever, they take down the flag, and fold it in the prim and propah gay military technique and take it to for safekeeping in the flag(?) house until it’s put back up on the flag pole again at daybreak.

And then everybody gets up to go. But first, only the white people are allowed to leave. That rule must be there to remind everybody how it must have been like before the country got independence. I almost shouted “SIMON GO BACK!”.

Damn, patriotism can be so infectious!

14 comments
Labels: Adventures in Real India, how come they don't realize how stupid this shit is, India, Indo-Pak bilateral talks, much ado over nothing, Real India, Wagah Border, You will take away my cynicism from my cold dead hands
Newer Posts Older Posts Home
Subscribe to: Posts (Atom)

The views expressed on this blog are the opinion of the author. The author assumes that most people do not believe anything and everything that is printed. Like Harry Potter. Although if you really believe in Harry Potter, you might pretty much believe anything.

Also, please remember that a lot of crap passes for humour around here. So read at your own risk. You have been warned.

All original content on this blog is copyright of the author and Overrated Omnimedia Pty Ltd., unless stated otherwise. None of this shitty content may be reproduced in it's entirety without explicit permission from the author.

Why would you want to copy this crap anyway? Seriously, only a masochistic would want to put his name to things written on this blog. Look into the mirror and ask yourself. Do you really want anyone to think you wrote this? There is a reason this blog is anonymous.

Throw your shoes at

In order of appearance

Over Rated
I don't have my own TV network. I don't have a radio show. I don't even own a newspaper journal. I do, however, have an opinion. An opinion on everything under the sun. So here it is . . .