So I wrote this post when India and Pakistan had started bilateral talks last year, for the first time after so many months! Anyways, this got lost in the ‘drafts’ section, and since both countries are back to talking again (because as they say  538061844791849173583629172491312 time is the charm), this is relevant. So you could read it both ways, as something that happened in the past, or something that will happen in the future. Whatever works for ya, guvnor!

Note: Some dialog may have been changed to reflect recent developments. Also, watch out for the clichés. 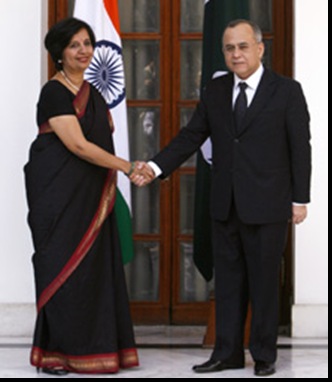 After three false restarts, India and Pakistan are ready to finally start the dialogue-to-plan-start-of-dialogue. Yes, welcome to Season 4 of So you think you can hold a bilateral dialogue? Even though PM Singh has had a few bilateral meetings with both President Zardari and PM Geelani, everyone's pretending that didn't happen, and this is the first time they're meeting, after thousands of years of sending rude superpokes to each other through facebook.

And since there is no definite name for the summit/meeting/whatevs, we have helpfully named it OMGLOLPalooza, because, why not?

Anyways, with the rest of the world watching (Not really. The Europeans are busy trying to save their economies while getting their ass kicked in football, the Americans are busy praying, sexting and blaming Obama for their hernia. the people in the continent of Africa are alternatively starving and killing each other, the South Koreans are occupied with playing video games, the Japanese spend their time having sex with female robots, the Australians are planning to spend the summer punching and kicking anyone they can get their hands on, meanwhile Israel and Iran are scheduled to spend the rest of the year trying to cockblock each other. Also, the whole world has seen this movie before and knows how it ends.) both these nuclear 'powers' on the brink of 'war' to finally set aside their differences and finish negotiating the divorce settlement they started negotiating more than six decades ago!

So here is the conversation that happened during their super-secret meeting:

SB: Hi . . .
NR: Oh hai, I can haz Hafiz Sayed?
SB: LOL! No! Strategic Asset FTW!
NR: Sadface
SB: I can haz Cashmere?
NR: R U Crazy?
NR: Can't even handle territory you actually have! Amirite?
SB: True dat! LMAO!
SB: But I can haz Cashmere?
NR: *facepalm*
SB: Is that a yes?
NR: No, no, a thousand times no! From our cold dead hands! Also!
NR: Which reminds me, stop trying to kill us all the time!
SB: Non-state actors, we can't control them, trolls etc. You know the drill . . .
NR: Yeah, pretty much.
NR: Okay, so here are some new dossiers. New evidence against old & new people.
SB: Ummmmm, yeah, sure, we're going to "read" this and take it "seriously".  *snigger*
NR: Umm, yeah. I'm sure about that!
SB: So can we talk about Cashmere, then?
NR: On two conditions. . .
SB: Which are . . . ?
NR: First, stop pronouncing it as "Cashmere", it's a place, not a sweater. K-A-S-H-M-I-R.
NR: Second, are you fucking kidding me?
SB: Fair enough.
NR: Now that we've got that out of the way, what’s with spying through our embassy staff?
SB: Well, I can’t speak for the ISI, because I’m not even allowed near their offices and if they ever see me there they might shoot me . . . but they must be doing that just to piss off Arnab Goswami.
SB: If they wanted real intelligence about your country, they would just ask the Chinese to send it over, in PDF format!
NR: Well, the Chinese are efficient, to say the least.
SB: Yes, yes they are.
SB: Have you seen their phones? They can do anything! Anything! Even talk dirty to my wife, while I watch my favourite TV show, The Secret Adventures of Agent Rana! It’s the #1 show, in Pakistan.
NR: Dude, calm down! And really, that was way serious TMI!
SB: Well, I was promised that we could talk about anything we want . . .
NR: Anyways . . .
SB: Sorry to interrupt, but before I forget . . . . something something Indus Water Treaty
NR: Huh?
SB: Just needed to mention that too!
SB: Which completes my checklist.
SB: Now I can go on teevee and proclaim that all issues important to Pakistan were discussed.
NR: You’re a sneaky basted!
SB: Guilty as charged! LOL!
NR: *rolls eyes*
NR: Okay, now can we get back to talking about terrorism?
SB: Yeah, sure.
SB: We want you to stop terrorizing us . . .
NR: O RLY?
SB: . . . with Mahesh Bhatt movies!
NR: To tell you the truth, he is one of our secret weapons.The other one is Himesh Reshamiya.
NR: Collectively, they are known as the Weapons of Mass Irritation.
SB: I see your Himesh, and raise you an Atif Aslam.
NR: Oh, that’s a good move. A bloody good move.
SB: Want to play a game of Poker?
SB: Whoever wins gets Cashmere!
NR: Jebus Hussien Christ! You’re an idiot!
SB: Well, you’re starting to sound like my wife!
SB: It makes me horny.
NR: I can’t do this right now. I have a headache.
SB: That’s what she says! Hahahaha!
NR: …….
NR: ……..
NR: This meeting is over.
SB: See you again . . . . in a few months time?
NR: *Sigh*. Yeah, I guess.
SB: You bring the food, I’ll bring the wine. *Wink*
NR: *Mumbling to herself* The only thing I’ll be bringing is a frikin pepper spray.
NR: *Exits*

Too bad, read this while in a room where others were (apparently) studying (their books) seriously! So, had to restrict my laughter to the mental space.

Too good, too good!

BTW, why did the Indian representative have to be the holy one that was flirted with? ;)

Your anti-nationalist writing is unwarranted and shameful, a la Arundhati Roy. We don't want to deal with/ handle the truth. The government is in place to handle that.

(We expect a certain measure of dependability of a fellow-inhabitant from the land of Barkha Dutt and Sagarika Ghosh. We implore you to kindly bear in mind the lofty standards set by such idols)

BTW, just realized the expansion of 'LOL' doesn't lend it to being restricted to the mental space. Unless I say something like - "main mann mein khub zor-zor se hansaa"!

Yes, I license you to make fun of such hyper-ironical finger-slips, not that you need one! ;)

he he, brilliant. That's about it - crossing out the checklist. lol...

And trust KP (Ketan) to ask a moral/ethical/whatever... question even on a funny post :)

Arrey, that moral/ethical/whatever question was also funny. At least I thought so. :(

@Anon: Thanks! That's how he actually pronounces it, on teevee.

@Ketan: So no one could read your poker face? And NR was the ladyee being hit upon because (a) She's a ladyee and (b) This was supposed to be a metaphor or something. I really should not try to be clever. I tend to fall flat on my face!

@Stray: Haha, if I ever start writing like any of the the three "aforementioned" women, please call an exorcist!
And you don't know what FTW and TMI mean? Gawd, you're such a n00b!

@Ketan: That happens only when one interprets "Loud" to refer to sound. One could be loud without actually making noise. For example: Some people (i.e. Govinda) wear shirts which are more loud than any sound they could ever make. (This has been an edition of #CommentLikeKetanParekh). Please excuse :P . . .

this one was killing. Loved it. See you in a few months time. Great.

The views expressed on this blog are the opinion of the author. The author assumes that most people do not believe anything and everything that is printed. Like Harry Potter. Although if you really believe in Harry Potter, you might pretty much believe anything.

Also, please remember that a lot of crap passes for humour around here. So read at your own risk. You have been warned.

All original content on this blog is copyright of the author and Overrated Omnimedia Pty Ltd., unless stated otherwise. None of this shitty content may be reproduced in it's entirety without explicit permission from the author.

Why would you want to copy this crap anyway? Seriously, only a masochistic would want to put his name to things written on this blog. Look into the mirror and ask yourself. Do you really want anyone to think you wrote this? There is a reason this blog is anonymous.

Throw your shoes at

In order of appearance

Over Rated
I don't have my own TV network. I don't have a radio show. I don't even own a newspaper journal. I do, however, have an opinion. An opinion on everything under the sun. So here it is . . .